After parts 1 to 4 of this series where we have mostly been loading and tweaking data for the Cycling Tweets, now it's time to have some fun querying this dataset with Cypher.

All of the queries are on Github, but let me just walk you through a couple more interesting ones.


Warming up the "Cypher Muscles"

Let's start with something easy, just to get the "Cypher Muscles" going:

This query gives us the "degree" (the number of "TWEETS") relationships of a "Handle" node) of the nodes in our dataset, and a first indication of what to look for further on:

Turns out that this is quite interesting. Very few of the "top gun" cyclists seem to be the top Tweeters. The only one that really stands out I think is Luca Paolini - the others are basically excellent riders, but not the "top guns". At least not in my opinion/experience of the sport.

So lets take a look at the #hashtags. Which ones are most mentioned in Tweets?

And the result is kind of obvious:

The big races like Paris-Roubaix and the "Ronde van Vlaanderen" (#RVV, or "Tour of Flanders") are the top mentions.

As you may remember from part 4 of this blogpost series, we used the GraphAware framework to calculate the PageRank of the different nodes in our dataset. So let's take a look at that:

You immediately see the "big guns" (like Tour de France winners Alberto Contador, Chris Froome, Cadel Evans) pop out. But this does not say a lot - so we want to do a bit more exploration of these top riders and see what they are really connected to.

"Impossible is Nothing" with the power of WITH

To paraphrase my dear friend Jim Webber, "Impossible is Nothing" with Cypher and Neo4j.

Because here's the thing. When I was starting to do this little project, I did not know what I was going to find. I really didn't. Of course I knew a bit about Neo4j, I am a fan of cycling, but still... it was all kind of an experiment, a jump into the unknown. So this is where I fell in love - again - with Neo4j, Cypher, and the way it allows you to interactively and iteratively explore your data - hunting out the hidden insights that you may not have thought of beforehand.

A key tool in this was the "WITH" clause in Cypher. From the manual:

The WITH clause allows query parts to be chained together, piping the results from one to be used as starting points or criteria in the next.

So that means that I can basically iteratively query my dataset, and use the result of one iteration as input for the next iteration. Which is very powerful in my opinion. So here's what I did with the "top ranked" nodes:


This gave me a nice little overview: 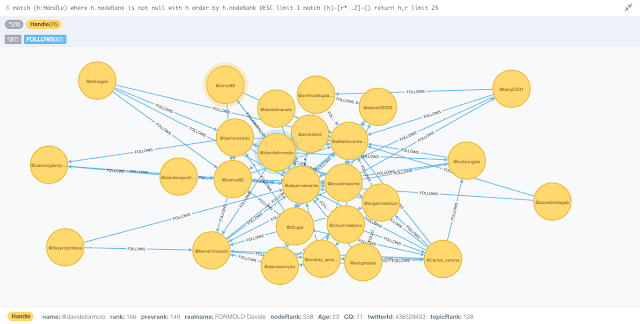 However, because I had to "LIMIT" the result, it felt as if I was artificially skewing the view. So lets take a second pass at this.

And I can do something very similar by just tweaking the query to find out what is connected at dept 2 or 3...

The order of the result is a bit different then:

So that gave me some good feel for the dataset. Again:I think it's mostly this interactive query capability that makes it so interesting.


Betweenness on a subgraph

So then I thought back to some work that I did last year to try and implement Betweenness Centrality in Cypher. The result of that was clearly that it was pretty easy to do, but... that it would be very expensive to do so on a large dataset. I think this would be a prime candidate for another Graphaware component :) ... but let's see if we can use WITH to


Turns out that this was pretty straightforward. Here's the query:

As you can see - this is quite interesting. It's clear that there are a number of lesser known riders that are very "between" the top guns (in terms of PageRank).


Wrapping it up with some pathfinding

So last but not least, we need to do some pathfinding on this dataset. In my experience, that always gives away some interesting insights. 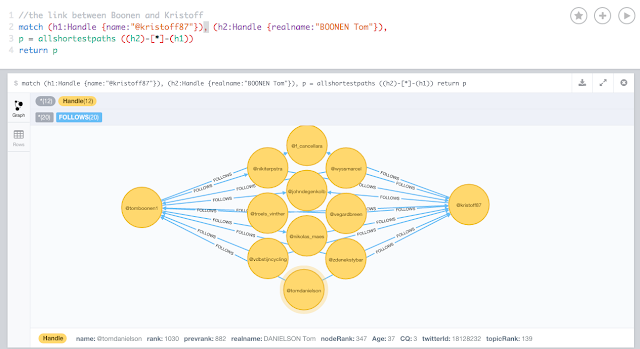 But then my suspicion is that the Teams that these riders belong to are actually really important. So lets take a look:

As you can see we are using the same principle as above: WITH ties it all together. 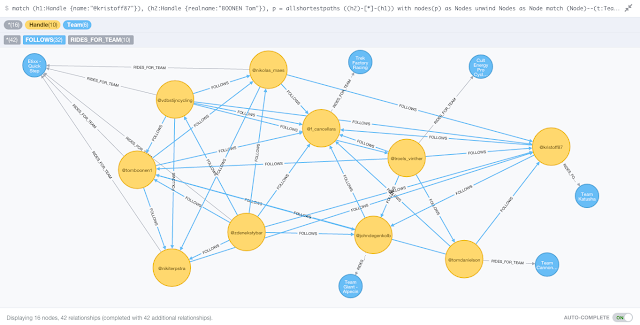 That's about it, folks. There are so many other things that I would love to do with this dataset (Community detection is high on my wishlist) - but I think 5 parts to a blogpost series is probably enough :) ...

I guess you could have seen from this series of blogposts, that I am a bit into Cycling, and that I enjoy working this stuff with Neo4j. It's been a lot of fun - and a bit of effort - to get all of this done, but overall... I am pretty happy with the result.

Please let me know what you thought of it too - would love to get feedback.