In part 1 of this blogpost series, we created and prepared a dataset with all the modern Olympian medallists from 1896 to 2012. In part 2, we loaded all that data into Neo4j: here's that article. Now, we of course want to do some interesting queries on the dataset, and see if the Graph will yield any interesting insights - as it usually does.

Let's start with something easy - doing some counting of the numbers of sports in every game since 1896. Here's how we do that:


//number of sports per game

Then you can see that the number of sports has not really changed that dramatically over the years: In the early days we immediately went from 9 sports at the first Olympic game in 1896, to 19 in 1900.

Then the number remained fairly constant for years - settling at 22 in 2012.

As an orienteer (our sport applied to be an Olympic sport fairly recently, but got rejected), I follow that with some interest, so I wanted to take a look at which sports were previously exercised at the Olympic. So instead of just counting the Sports, let's just collect and return them:


//number of sports per game

And then came a first surprise from the data: did you know that Tug of War was an Olympic sport from 1900 to 1920?

That looks just so unbelievably cool:

Wish we still had that!

Next up, the "classic" tally board of Olympic medals per country.  Of course we could just "google it" and find the inevitable Wikipedia page, but let's do it with Cypher, shall we? Let's randomly pick the 1956 Olympics in Melbourne (which, notoriously, were the only Olympics that were held in two locations - read about it here).

The results are there in no time:

Now we can of course also look at the different other dimensions, and for example look at the number of medals per sport per country:

And we get the following results: 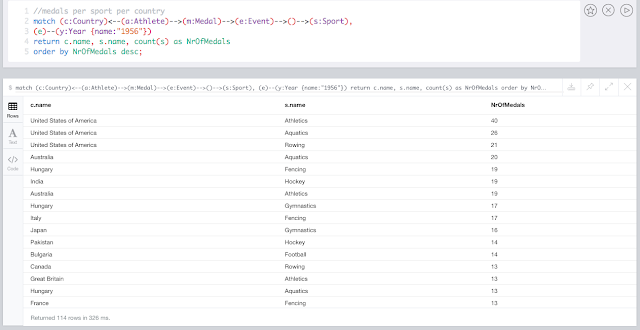 Nice! Now we can go an explore another dimension.

So then I thought of some interesting other questions - like for example "who actually won a medal when competing in an Olympic game hosted in their own home country?". It took me a couple of interations to get the query right, but then I realised it's just a matter of looking at the loop in the data model, which is easy enough. Here's the query:


//athletes with medals in games hosted in their home countries

And then you get this: 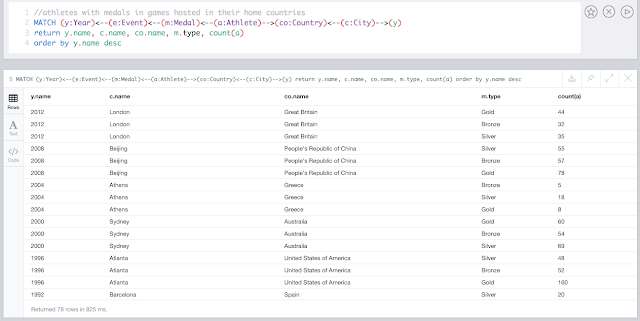 Which I thought was interesting - because immediately I noticed that a small country like Greece, actually got a LOT of Silver medals in 2004. Why is that? Let's look around. So I immediately found this page on Wikipedia, which is giving me very different numbers: 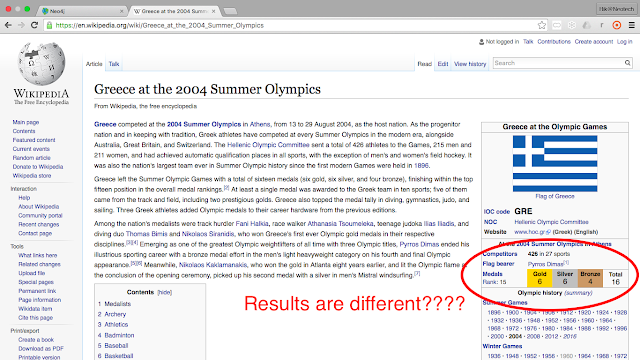 So then I started looking at the details, and added a collection of Athlete names to the query:

And then you immediately see that the Women's waterpolo team was getting individual medals, and that was being counted differently in our dataset:

Last but not least, we can now start wrapping up our query examples, looking at the best of the best: the Top Olympian medallists.

Let's do that simple query first:

and then we see the giants like Larisa Latynina and Michael Phelps:

We can of course also split that up by medal type:


//top Olympians and their types of medals

and we see a bit more detail:

And then finally, I decided to split this up by different games:


//Olympians with medals in different games

And then I start to see some more familiar names like Anky van Grunsven (a famous Dutch dressage champion):

Last but not least, I decided to try and find the different Athletes that had actually won an Olympic medal in more than one sport - and if so, when that happened. Here are those queries:


//Olympians with medals in different sports

with a.name as Athlete, c.name as Country, collect(s.name) as Sports

Guess what: only 7 people ever succeeded in doing that:

That looks interesting! Now, of course I had to wonder that this probably did not happen very recently, as sports in general and Olympic sports more specifically have gotten SOOOOO much more professional - you just can't get any results there if you don't dedicate your life to it these days. So let's get the most recent Olympians with medals in different sports:

//Most recent Olympian with medals in different sports

with a, collect(s.name) as Sports

and then the graph immediately shows us that it has been more than a century since this last happened! 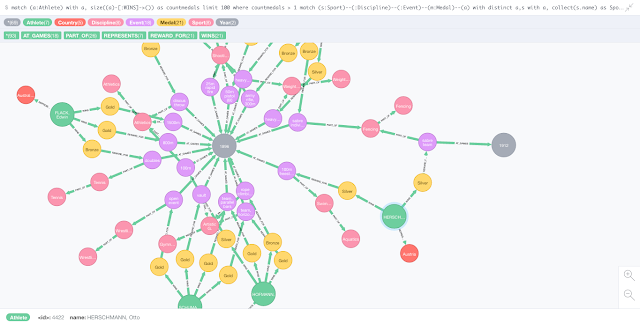 Just read the fascinating story of Otto Herschmann if you want to get a feel for how much the Olympics have changed - from a rich-man's passtime to a full-time profession.

All of the above queries are of course on github for you to explore and expand - I hope you enjoyed this series as much as I did.